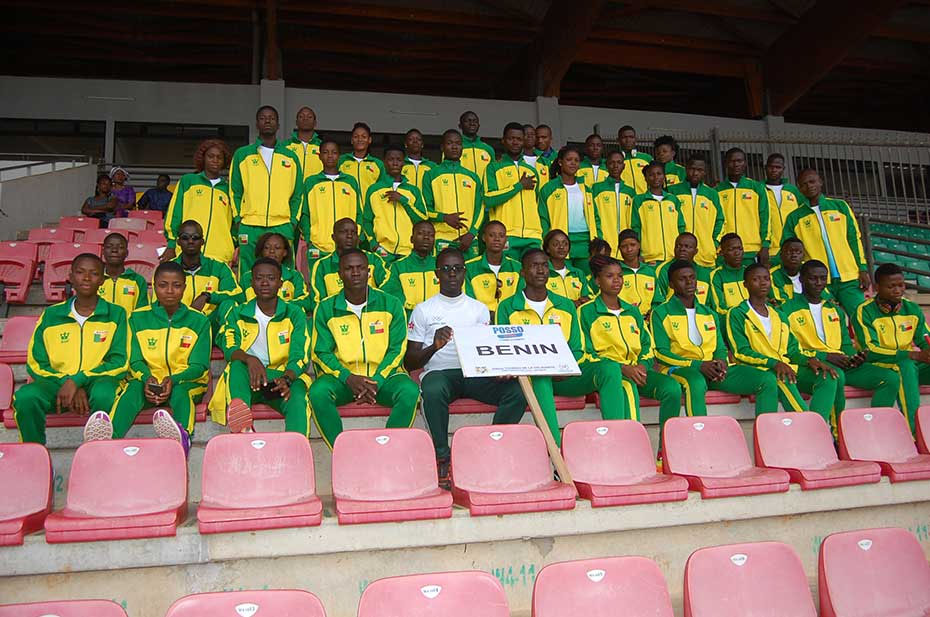 In June, the Benin Athletics Federation was named thesecond bestsports organisation in the West African nation by the country’s Olympic and Sports Committee.

The distinction came along with a check for4.5 million West African francs (approximately US$8130), which was converted at the federation’s requestto badly-neededtrack and field equipment, and promptly handed over to local athletics leagues.

“This plan had interventionsat every level that included the training of coaches and athletes andthe organisation of regular competitions for all age training.We focused on performance-based administrative management with clear indicators and put in place information and communication infrastructure”.

“All of these actions together permitted us to win the admiration of the Olympic and Sports Committee.”

Benin’s athletics officials are especially proud of their silver medal, no less because of the hard work they had put in, in spite ofcertain difficulties.

“The first difficulty is financial, ”says Novignon Okry, the organisation manager at the federation. “It is true that the government has placed our sport among the top five sports that benefit from government’s attention and its action plan but the level of sport in Benin generally is weak, and sponsorship is not yeta well-developed concept, so it is difficult of obtain funding from elsewhere.”

Another challenge the federation is often faced with iscultural in nature, where sports in general are not considered a viable professional option, and children are often enthusiastically discouraged from pursuing careers as athletes.

“It is even worse for women, even though the biggest athletes in the country are women,” says Okry. “For most of them, when they venture into athletics, certain cultural practices force them to abandon these activities prematurely.”

The Beninese sprinter Beatrice Midomide knows exactly what that means. She is one of the country’s fourathletes training at the African Athletics Development Centre in Lome, Togo.

“I was in my fifth year of primary school when I discovered athletics,” she says. “Unfortunately, my parents were not okay because of the risks of going into town to train at the stadium.”

Safety issues aside, Midomide’s parents were worried about the influence on her behaviour. It took gritty determination for her to remain committed to athletics.

“One day I stole money from my father to go and train in town. Upon my return, my parents severely punished me but that situation never reduced my desire and I never stopped slipping out to go and train.

“Finally my parents saw the inevitability of it, that it was a passion and because of their love for me they resolved to allow me to do athletics.”

Midomide proved to be good enough to join Benin’s athletics national team in 2013, and has since represented the country in several continental events. But many similar stories often end differently, withpromising athletes abandoning the sport altogether. However, athletics officials in the country are doing their best to reverse the trend. It helps that athletics is gaining in popularity.

“You just have to look at the turnout at the road races we organise to see how interested people are,” Aihou points out. “Athletics is quitepopularand it is growing in popularity because of the results of the country’s athletes in competitions in the sub-region and Africa as a whole.”

These include middle-distance runner Noélie Yarigo and Odile Ahouanwanou, the African heptathlon champion, who set a national record at the World Championships in Doha last year.

“Behind football, which tends to be way up there in many African countries, athletics is the next most widely taught discipline in schools and colleges in Benin, which means you have generations of young people every year who are learning about the sport and that is always a good thing.”

The future of athletics in Benin

The athletics federation had big plans in 2020, which included the regular national competitions for all age groups as well as recently introduced championships in local leagues. However, those were shelved when the pandemic hit the country.

“Covid-19 has upset and continues to affect athletics and other sports in Benin,” explains Aihou. “We had all the normal calendar events, the championships and others planned but we didn’t really take off. Since March, we’ve postponed our entire calendar many times but with the decision that was taken to save lives, we really didn’t have a choice.

“Government measures meant a stop in sports events and the closure of stadia. Of course this put an end to structural training with athletes. There is also an absence of funds, just a general gloom and a void in thefederation’s activity schedule.”

There are plans to restart competitions but that will depend on when the Beninese government lifts restrictions on sports and crowds. When it is deemed safe enough to restart activities, the federation is ready to spring into the action.

“We want to expand the practice of athletics in allcommunes in the country and we are encouraging the creation of professional clubs,” says Aihou. “In this vein, the Beninese government has initiated in its action plan, the re-dynamisation and restructuring of some seven sports in the country, among them athletics. This has allowed us to have at least one trainer in every commune in the country, paid by government and charged with the follow-up of young athletes, especially in schools and neighbourhoods.

“We are in the process of training officials so that we can have qualified individuals who can develop athletics in the country. We will create partnerships with primary schools so that we can bolster the sport among the youngest children.”

No Beninese track and field athlete has ever won a medal at anOlympics orWorld Athletics Championships. The country’s athletics officials are working hard to change that in the comingyears.