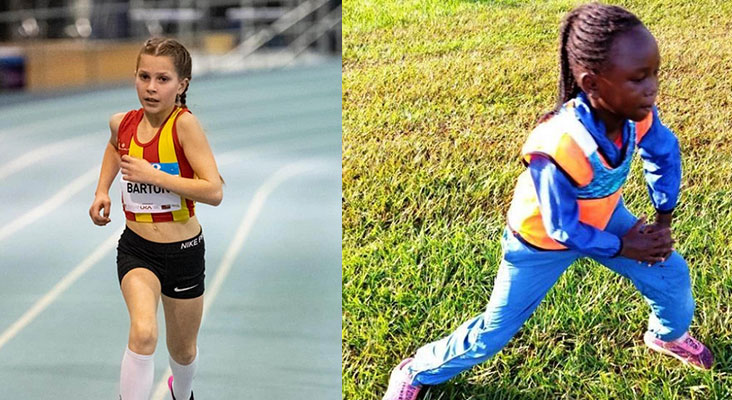 Godwin Adongo loves to run. At eight years old, she finds athletics shows more interesting than cartoons and watches the Diamond League for fun. On Saturdays and Sundays, she hits dirt tracks in the Ugandan city of Lira for one-hour drills, honing her skills as a runner.

“I started running when I was three year old,’ says Adongo. “That’s when I first went to school.”

In 2018, she stunned crowds by her seemingly effortless conquering of the 1500m and 3000m events during the national school championships in Uganda. Her obvious gifts earned her the privilege of a dedicated group of professionals consisting of three coaches and a personal doctor, to monitor her progress.

“Godwin has a God-given talent,” says her father Patrick Okodi proudly. “When she joined primary one, she started to participate in school competitions and I noticed then that she had aptitude.”

It was quite easy for Okodi to pick up on her gifts as he might have been an athlete himself, had he shown a propensity for the sport. After all, his father was John Akii Bua, the Ugandan legend whose record-breaking run to gold in the 400m hurdles in the 1972 Olympic Games made him a national hero. However, his gift seemed to have skipped a generation.

“Akii Bua was a loving father and he used to train us, his children, but we were not talented in athletics,” says Okodi.

Decades after his passing, Akii Bua remains a celebrated figure in Uganda. His family treasures his memory and legacy. Adongo is growing up with stories about her legendary grandfather and they are already inspiring her.

She also follows Kenya’s Hellen Obiri and Genzebe Dibaba from Ethiopia and hopes she can meet them one day.

“I want so much to talk to my role models Genzebe Dibaba and Hellen Obiri, I need their advice.”

Thousands of miles away in England…

Eleven-year-old Eva Barton is shaping her path into athletics. She has won at least 20 races since 2018, setting some of the fastest road mile & track mile times for her age group. She has competed in sprints and long-distance races but is now showing a liking for middle distance.

“Laura Muir is my idol,” says Barton. “I was lucky enough to see her break the indoor 1 mile record last year at Birmingham, it was at that point I decided middle distance was going to be my focus.”

This year began with Barton ready to continue down that road but when the coronavirus hit the UK hard in March, the competitions stopped. As the break lengthened, she began to outgrow her kits.

“I had several pairs of spikes that were virtually unused due to Covid19 lockdown,” says Barton, “so I decided to advertise them on social media.”

In Uganda, Okodi saw the ad on Facebook. He replied with a picture of him and his daughter, alongside the comment, “help the young girl with the spike, she does not have one.”

“When I saw pictures of Godwin training in Uganda, I realised I’m lucky enough to have every bit of kit I need to train & compete,” says Barton.

She was moved to help and asked about Adongo’s shoe size. Unfortunately, the running shoes were too big for Adongo but Barton thought of something else.

“I get to go all over the UK to race in great venues, but it’s not the same for her.  She trains so hard and has become a regional champion and deserves the same chances as I get.

“So I decided to save my pocket money to buy Godwin some new shoes and running kit.”

On Facebook, she put pictures of herself and 8-year-old Abongo side-by-side and asked, “What's the difference? It should be none, we should both be able to dream of being champions.”

“When I posted what I was doing on social media tens of thousands of people all over the world saw it, several companies and schools from the UK made small kit donations – and a few people even donated money, too.

“British Athletics saw my article and also donated some team kit for her to wear. I haven’t raised a lot of money but so far I’ve been able to raise enough to buy her some new trainers and a set of running kit like mine so we can match and my sponsor Enertor provided some specialist insoles, socks and clothing.”

Abongo and her family were overwhelmed with gratitude.

Helping “as many girls as I can”

The response to her social media campaign has given Barton and her family a desire to reach out to other athletes from difficult backgrounds.

“I think there are great young girls running all over the world and they all deserve a chance of training to becoming world champions. Having access to the basics like running shoes shouldn’t hold any of us back. I’d like to be able to help as many girls like me as I can,” says Barton.

Barton’s father, Scott, is very supportive of his daughter’s idea and says it could be the springboard for a platform to reach out to other young girls who need support.

“With all the support Eva has had on social media she has an idea of creating some kind of sponsorship or foundation and being the spokesperson for helping raise funds and helping young female athletes all over the world.”

Meanwhile, there is a budding friendship between the two girls.

“I normally talk to Eva when our parents are chatting on Facebook,” says Adongo.

“We mostly swap messages and pictures via our parents about the races we are in and the training we are doing,” Barton adds. “I get to train on stadium tracks and Godwin trains on dirt tracks and in the countryside, it’s very different. But we are aiming for the same thing.”

They both have the support of their parents.

“I’m extremely proud of Eva and her attempts to help others,” her father says. “I think we could all learn something from her. In the highly competitive field of athletics - to see her helping others is inspirational.”

“I feel so good for both Eva and Godwin, and I believe that one day they will meet in a big event,” says Okodi.

The girls share dreams of dominating the tracks some day. Adongo wants to live up to her grandfather Akii Bua’s name, and sees herself as a “great athlete and a doctor” in future.

“One day I’d like to take Laura Muir’s mile record and compete around the world representing Great Britain, hopefully with Godwin in the same events.”