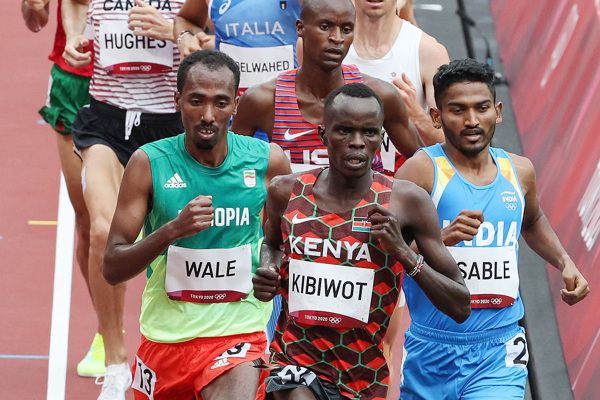 Of his two compatriots,Mohamed Tindouftmade the cut, thanks to a time which was among the six fastest losers of the three rounds (8:15.91),whereasAbdelkrim Ben Zahra, left the competition early (finishing 10thin the second round).

In the first round, the Ethiopian LamechaGirma, holder of the year’s fastest time(8:07.75) and the Kenyan Benjamin Kigen,made it smoothly throughto the final, their control over their races never in real doubt.The formertook first place in his round (8:09.83), while the latter (8:10.80) came in behind the Japaneserunner RuyjiMiuro (8:09.92).

The same was true forthe Kenyan Abraham Kiwiwotwho asserted himself on the second roundwith a time of 8:12.25,closely followed by theEthiopian Getnet Wale (8:12.55), while the next African in line, Eritrean YemaneHailéselassie, booked his place in the final on2ndAugust by clocking one of the six fastestlosing times.

After seven days ofthe competition, Moroccohas suffered its share of setbacks across a number of disciplines. Any hope of not returning from Tokyo empty-handed rests on the kingdom’s representativesin theflagship Olympic discipline(athletics).These events got underway early this morning,Friday30thJuly, with the qualifying rounds, the standout performer being Soufiane El Bakkaliin the 3000 metres steeplechase.

At 24 years of age, El Bakkaliis without doubtthe country’s most highly-admiredsportspersonthanks to his remarkable exploits and incredibleperformances since the Rio Olympicswhere he might have finished third on the podium, but still attracted expert acclaim given the strength of the field. Since then, he has made steady progress with continually improving times.

As earlyas 2014, he finished fourthat the World Juniorsin Eugene, USA. Soufiane runs both the 3000 metres and thesteeplechase, as he can also compete in the 5000 and 1500-metre races,which will be his second challengeat the Japanese Olympic Games.

His silver medal at the London World Championships in 2017, behind the Olympic champion,Kenyan KiprutoConseslus, absent from this year’s Olympics, brought him high praise and cemented this young runner’s standing among the greats, with experts unanimously predicting a bright future.

El Bakkalihas great ambitions and knows that he is shoulderingthe hopes of an entire nation starved of victoriessincethoseof the Los Angeles Olympics and thegolden mementos of Nawal El Moutawakel, Said Aouita and the historic doubleof Hicham El Guerrouj in Athens. He must now build on these achievements with a view to bringing home further medals and trophies, and he is well aware of this.

At the 2019 Doha World Championships Soufiane was aiming for gold but had to settle for bronze.

With a personal best of 7min 58 sec 15/100 El Bakkaliis now hoping to pick up a gold medal in Tokyo.

"Representing my country at the Tokyo Olympic Games will be a chanceto send a strong message to all young Moroccanswho want to succeed in life, I’ll show them that anything is possibleif you have the will, the passion and the right attitude. This is going to be an incredible moment”he promised.

After all, it’s worth remembering that out of the 23 medals won by Morocco, 19 have been for athleticsand the other four in boxing.